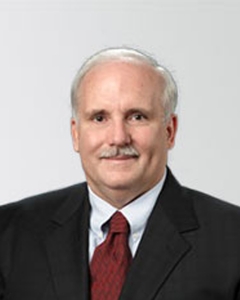 R. Lawrence Steele, a Valparaiso native, received a Bachelor of Science in Finance and law degree from Indiana University. Prior to joining the firm, he worked in the Lake and Porter County Prosecuting Attorneys’ Offices and was the United States Attorney for the Northern District of Indiana. As U.S. Attorney, he successfully prosecuted significant criminal cases involving the FBI, DEA, IRS, U.S. Customs, and the Secret Service, and also represented the government in federal civil trials. After entering private practice, Larry served as attorney for a number of governmental subdivisions. Larry has received numerous commendations for public service, including recognition from the President of the United States, the Attorney General, the Indiana State Police, and the Director of the FBI. Larry continues to represent clients in civil and criminal cases, as well as business and real estate matters. He is also a certified Indiana Mediator, and has frequently served as a Guardian ad Litem. He is admitted to practice law in Indiana and Wisconsin.